We believe in the power of storytelling and the importance of investing in the future by sharing those stories – whether they are stories of successful community ventures or lessons learned from stories of things you wish happened just a little bit differently. These are the stories of communities working together for the common good.  – Community Commons

DeSales Community Development | To get a sense of what’s happening at DeSales Community Development, it helps to follow the people that work there – if you can keep up. Employees tend to be on the go, shuttling back and forth between site offices, government buildings, parks, and schools. They carry youth program materials, building permits, rent checks, and health resources. Just recently, a collection of child-sized furniture pieces was purchased, assembled, and delivered to an elementary school. On a larger scale, an assemblage of vacant properties purchased last year was presented to a major nonprofit looking for a new space.

All of that work – done with everyone from accountants to construction crews to social workers – happens under the umbrella of DeSales, a nonprofit that serves a handful of neighborhoods on St. Louis’ south side. Their work loosely breaks down into three areas: real estate development, property management, and community programs.

Director of Community Health Initiatives, Becky Reinhart, oversees a wide range of these programs and resources for the neighborhood. A work day might include a meeting with a school to coordinate sports programs, a meeting with community gardeners to plan landscaping changes, a drive around the south side checking on the condition of various vacant buildings, a supervisory check-in with DeSales’ community resource coordinator, and then a trip to the park to help set up a free arts camp. All of that fits into a growing awareness among researchers that active, engaged neighborhoods are healthy neighborhoods.

“Housing is really important, but if you just focus on housing, the other stuff housing enables isn’t going to happen automatically,” Reinhart said. “There’s a lot more to that challenge.”

After nearly 40 years in the neighborhood, DeSales had become a respected developer and manager of quality, affordable housing. Those things are a major influence on health, as are the employers DeSales brought into the neighborhood, the vacant property it developed, and the community garden it established. But Executive Director Tom Pickel said the progress made in those areas led DeSales to wonder how they could improve quality of life beyond bricks and mortar. So, in 2013, he convened a group of service providers and stakeholders to further think about how to work together. 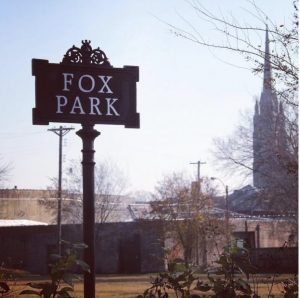 The group ultimately decided to focus on health, and enlisted the help of a practicum student from Washington University in St. Louis – Lindsay Jorgenson. Jorgenson was tasked with building health initiatives at DeSales, and soon became DeSales’ first Director of Community Health Initiatives. DeSales, and the neighborhood residents Jorgenson surveyed, fixed their attention on Fox Park, a green space in the heart of a neighborhood with the same name. The park was generally underutilized, and half of it was a recreation field that was closed to the public. With the help of the community and some grant funding, they reopened the field and established youth sports. Today, baseball, soccer, and basketball run most of the year under the name SouthSide Rec, which also includes programs like art, martial arts, dance, and Pokémon.

“That was something where there was a tangible change in people’s conception of what we were doing,” DeSales’ Project Manager, Sam Stephens, said. “You can’t fix up a house every single month, but every single season, you can organize a sports league.”

Stephens helps coordinate the moving parts within DeSales. Much of his days are spent working with the real estate and property management sides of DeSales, but he sees community development and health threaded throughout his work.

“Equitable, sound property management – that involves brick-and-mortar spaces and people,” he said. “The idea of converting a few of our buildings which were market-rate rentals to affordable rentals – that is a brick-and-mortar way of adapting our project to better suit the needs of the greater community.” 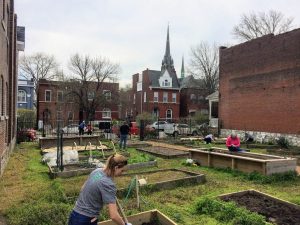 Mike Ziegler, DeSales’ community-based resource coordinator, sees up close how intertwined these things are for many residents. As a social worker, he connects them to resources that meet their needs. He also works to build supportive networks within the neighborhood. Both things make the neighborhood healthier. They also both depend on access to affordable housing, good property managers, and relevant programming.

In fact, though he does a lot of healthcare referrals, almost 40 percent of his referrals are related to rental and utility assistance. Sometimes, he connects community members to DeSales’ property management company, Fox Grove Management. Other times, he’s working with Fox Grove tenants, which reduces costly evictions and reinforces the healthy outcomes of housing stability.

“For a lot of people, housing is a definite entry point for social work,” he said. “It’s a very natural fit.”

DeSales has found other “natural fits” within their work. In mid 2018, Ziegler helped a Fox Grove tenant put on a series of free healthy cooking classes for the whole community, which will also help promote her young catering business. And Pickel is spending much of his time working on Brick City Makes, DeSales’ largest development project yet. In 2017, DeSales purchased an 87,000 square foot former factory in the neighborhood, which they and their partners are turning into a customized, shared workspace for small and mid-sized manufacturers. Pickel sees it as a way to bring jobs and people to the area.

“If we were a private investor with pure return-on-investment in mind, it would probably be a good candidate for a self-storage building. But that would not yield any economic benefit for the community,” he said. “For us, Brick City Makes is really more of a community development project.”

DeSales has experience in all of those areas, but it continues to connect the dots both within its own organization and with other organizations. That means that in another five years, the employees at DeSales – though they’ll no doubt still be on the move – might be doing different things than they are now. It’s not something that concerns them.

“I don’t think there is such a thing as mission creep as long as we’re serving the community and filling a gap,” Reinhart said. “The community organizing and being a resource for neighbors has always been part of DeSales’ work here, so the health initiatives are built on that. They provide a platform for the neighborhood to be more than just a place for people to live.”